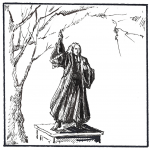 How Jesus silenced the lawyer in the temple, and what it has to teach us

“And no one was able to answer Him a word, nor from that day on did anyone dare question Him anymore” (Matthew 22:46 NKJV).

It takes a lot to shut up a lawyer, but Jesus did that and more in his last verbal battle with the Pharisees that came against him in the temple a few days before he was crucified. The Pharisees had long opposed Jesus, and the lawyer was probably the best they could put forward. But he was no match for our Lord. Our Gospel reading, Matthew 22:34-46, gives the account of what happened.

Despite their bad motives, the Pharisees did us a favor by initiating the conflict with Jesus. That’s because Jesus’ response to their attack provides us with timeless truth on both Christian ethics and the messianic authority of our Lord. It also provides guidance for our own defense of the faith in today’s world, a world where secular and religious opponents often marshal their words against us. We’re not above our Master. If he had to deal with Pharisees from time to time, so must we.

The lawyer tried to entrap Jesus with a question about the Law of Moses. Jesus answered the question with stunning effect. Then he turned the tables on the Pharisees and asked them a set of questions about the Messiah. His questions shifted the focus of the debate, and led to the Pharisees’ complete defeat. To the questions of the lawyer and of Jesus let us now turn.

The Pharisees had previously sought to trap Jesus in the question of Caesar’s coin and tax (Mathew 22:15-22). After Jesus’ response to that challenge bested them, the Pharisees withdrew for a little while. Later the same day, the Sadducees put a question to Jesus concerning marriage and the resurrection (vv. 23-33). Jesus’ answer astonished the multitudes (v. 33) and silenced the Sadducees (v. 34). When the Pharisees heard that the Sadducees had been silenced, they mounted another assault on Jesus (v. 34). Contentious to the core, they chose a lawyer (Greek, nomikos) to test him with a question.

The lawyer was an expert in the Law of Moses, which had been given to Israel to govern all of life. Because the Law contained both religious and civil regulations, the lawyer was of necessity both a theologian and a legal scholar. (In his world, church and state weren’t separated like they are in our day.) The lawyer was doubtless chosen because he was a skilled debater with a keen mind and sharp wit. As I stated earlier, I think it likely he was the top lawyer in the Pharisee’s camp.

The lawyer’s question was this: “Teacher, which is the great commandment in the law?” (v. 36) It was a trick question, one that anticipated a narrow answer that would separate Jesus from the larger part of the law and thus expose him to broad rebuke and ridicule.

Jesus wasn’t fooled. Refusing to give a narrow answer to the narrow question, he gave a broad answer instead. Rather than zero in on one law to the exclusion of all others, he summed up the whole purpose of the law by putting its two major portions into their proper categories. His answer had the effect of a broadside, which is a nearly simultaneous firing of all the guns from one side of a warship.

Jesus concluded by saying that these two commandments sum up the essentials of both the Law and the Prophets, which were two bodies of complementary truth. The Law spelled out the rules, and the Prophets sought to bring Israel into compliance with them.

The Lord gave the lawyer far more of an answer than he expected, and there was nothing the lawyer could rebut. The Lord’s broadside sank the lawyer’s ship, along with all the Pharisees who were on it.

Jesus wasn’t through, however. He had some questions of his own for the Pharisees. There were three of them. The Pharisees answered his first question, but could not answer the ones that followed. In the end, the Lord’s interrogations exposed the Pharisees’ ignorance and silenced them.

The Lord’s first question framed two connected Messianic issues that Jesus subsequently separated and focused on in his two follow up questions. The first question was this: “What do you think about the Christ? Whose Son is He?” The Pharisees answered correctly, “The Son of David” (v. 41).

The Jews understood that Messiah (or Christ) was a title that indicated the one whom God anointed to be king. But the Messiah was also the descendant of King David, and therefore the rightful heir to his throne. So both title and lineage combined in the same royal reality.

The shift is important to understand because it forced the Pharisees to reckon with Jesus’ sovereign authority, an authority they refused to recognize or respect and against which they were in rebellion.

But we too must reckon with the Lord’s sovereign authority. Jesus the Messiah is far more than a wise religious teacher. He is the King of kings and Lord of lords (Revelation 19:16) whose teachings we are obligated to obey and whose purposes we are obligated to serve. God didn’t become Incarnate in the Person of Jesus to establish a new religion or philosophy club. He came into the world to set up His kingdom. Jesus’ question was and is about his lordship and kingdom, and we, like the Pharisees, must reckon with it. But whereas the Pharisees rebelled, we must submit.

The Lord’s question forced the issue of his kingly authority on the Pharisees then, and it forces the same issue on us now. We in turn need to force the issue on our world, by means of the proclamation of the gospel of the kingdom. The Messiah is God’s Anointed King. It is His will that all nations come under obedience to the sovereign to whom He has given “all authority in heaven and on earth” (Mt. 28:18).

The Lord’s first question framed the issues that Jesus intended to pursue in his next questions. Those issues were the Messiah’s lordship and lineage.

Question 2: a question of lordship

The Lord’s next question burrowed more deeply into the lordship issue. The question employed a citation from Psalm 110:1, a Messianic psalm written under the inspiration of the Holy Spirit by King David. The question was this: “How then does David in the Spirit call him ‘Lord,’ saying:

‘The LORD said to my Lord,

Sit at My right hand,

How was it, Jesus asked, that King David himself called the Messiah his Lord? In the natural order of things, the forerunner (in this case, King David) would have superior rank over his descendant. But here David declared himself to be the inferior. Why?

The Pharisees could not answer the question. But neither could they extract it from their consciences. It was lodged in their hearts like a harpoon.

Another issue is in play here, and it has to do with the Messiah’s eternal being. As Christians, we understand what the Pharisees could not. In terms of his humanity, Jesus was David’s descendant. In terms of his deity, Jesus both preceded David and was his divine superior. In terms of his incarnation, the Lord’s sinless humanity and eternal deity also constituted him David’s superior.

The Pharisees couldn’t answer the lordship question, but Jesus wasn’t through. He had yet another question to ask them.

Question 3: the issue of Sonship

The Lord’s next question was this: “If David then calls Him ‘Lord,’ how is He his Son?” (v. 45) This question raised the lineage issue again, and did so in the context of the lordship issue. The question was a mind breaker, and the Pharisees couldn’t answer it.

I think one of Jesus’ aims in asking this question was to force the smug, self-righteous, know-it-all Pharisees to come to grips with their incapacities and ignorance. I also think it served as a rebuke to the Pharisees who, instead of challenging Jesus, should have submitted to him.

In any event, the question further and inescapably reinforced the issue of the Messiah’s sovereignty.

In the end, Jesus’ questions totally silenced the Pharisees. Matthew writes, “And no one was able to answer him a word, nor from that day did anyone dare question him anymore” (v. 46). The final argument of the Lord’s enemies was squashed. The usually vocal Pharisees went silent. Jesus had defeated them.

Hopefully, we now have an understanding of the historic interchange between Jesus and the Pharisees. But what might this passage say to us in our day, beyond what we’ve already touched on? Let me suggest three things.

First, Jesus’ words say a lot to us about Christian ethics. In his answer to the lawyer’s question, Jesus’ comments on the Law summed up the whole of our moral duty to God and Man.

A truly orthodox faith has always called upon Christians to keep the moral imperatives of the Law. The Lord’s dividing of the Law into two basic commandments provides us with an easily remembered summation of those imperatives. We are to love the LORD our God with all our heart, soul, and mind; and we are to love our neighbor as ourselves.

The Person & Authority of Jesus Christ

In addition to speaking to us about Jesus’ authority, our Lord’s words in Matthew 22:34-46 clearly reveal his deity. Jesus is the true God/Man, the unique Incarnation of Deity in human history.

A full understanding of Jesus’ divine and sovereign authority must lead to genuine evangelism, that is, to the sort of evangelism that declares (1) the absolute Lordship of Christ, and (2) calls all men to submit to him. Genuine evangelism must necessarily declare a genuinely full gospel, and a genuinely full gospel is one that comprehensively declares the lordship of Christ in all its glory.

Wisdom for our Battles

Third and finally, our Lord’s handling of the Pharisee lawyer’s question points us to the way we can best handle similar questions that our enemies put to us in our day.

The motive behind our enemies’ questions is the same as that which drove the Pharisees. They want to challenge the ultimate authority and divine being of Jesus Christ. They also want to challenge the subsidiary authority of those who serve him. Our enemies’ attacks are thus aimed at the authority of Christ and his Church. Was not this the issue in the ten major Roman persecutions of Christians during the first three centuries of the Church? Is it not the motivating issue of Communism’s attacks on the Church? Is it not the root cause of historic and present day Islamic attacks on the Church? Is it not the true motive for Western secularist attacks against the Church?  Of course it is. Sinful men hate God Incarnate and despise his lordship, and they go to great lengths to rebel against him.

The method of the attack must also be noted. In an effort to open us to broad attacks, our enemies often ask us narrow questions. We should answer such questions as our Lord did, however, and give a comprehensive answer to them. Our comprehensive answer may be succinct, as the Lord’s was. We may also ask our own questions, and wrap them in mystery. Also, our questions needn’t be asked to provoke an answer. They may instead be asked to silence our opponents.

May God arm us for our own battles, give us grace in and for them, and grant us victory over our adversaries. These things we pray in the Name of Jesus Christ our Lord. Amen.